Got a 7 am flight to Lahad Datu today and then we travelled 3.5 hours by jeep to the Borneo Rain Forest Lodge. Now, this part of the tour does scare me because I have heard about all the leeches, spiders and other insects and creatures here.

I managed to get through most of the day without seeing anything too scary, but after dinner we were due to have a night safari. I was just speaking to one of my clients when something on a thread appeared between us – I never moved so quickly in my life to escape whatever it was. I then looked back to see what it was and just saw a ball hanging on a thread. I said “What IS that?” and as I said it, the thing seemed to hear me and opened up. It was the biggest spider I have ever seen. The hotel staff chased it away.

Next one of the hotel staff appeared with a long, yellow snake, that he had found in the hotel grounds – it was a cat eyed, dog toothed snake. Anyway, he was trying to get the clients to hold it. I advised my group not to, but then one of my clients decided he wanted to hold the snake and it bit him on the hand. The good news was that it was only semi-venomous and that was also the bad news. Even if we wanted to, there would be no way to get my client to a hospital, as the dirt track we travelled along to get here is now sheer mud after all the rain. 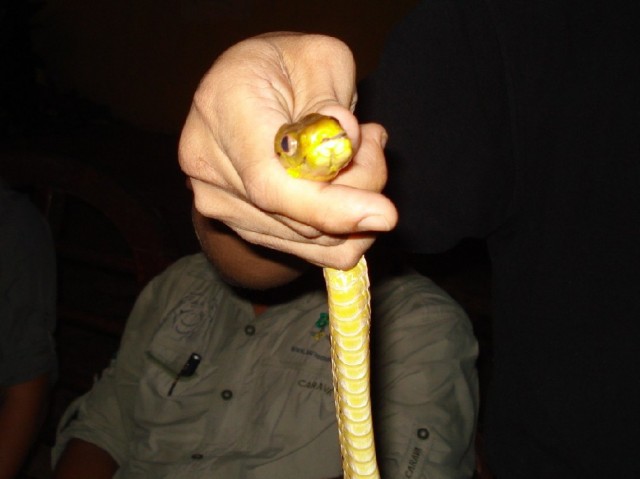 Donny, my naturalist here, has rubbed the bite with a leaf and told me to tell the client not to panic!! Anyway luckily my client lived to tell the story.

The nightmare continued on the night safari as a huge white moth hit me in the face and by the time I got back to my room, I was a complete and utter nervous wreck. Now I know what being afraid of your own shadow means and I was very jumpy. I then opened a cupboard and 2 geckos ran out and up the wall, giving me the fright of my life. I decided to let the 2 geckos stay in my room, as they do keep the spiders and bugs away and I even named them ”Ant and Geck”!

On top of all that the noises in the rain forest are deafening! My first few hours here had certainly been an adventure.

Tomorrow we have a pre breakfast trek to our next canopy bridge.

Amazingly, despite the adventures last night, I slept well. This morning we had our first trek in the rain forest and I did advise my clients to invest in some leech socks. So we had to wear long trousers tucked into the leech socks and boots over the socks. 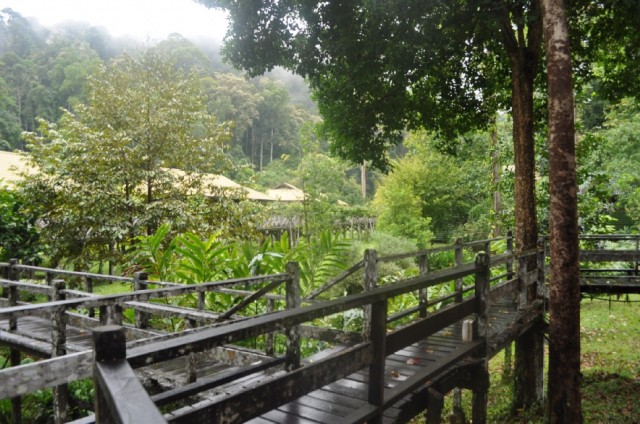 It was an easy stroll to the canopy bridge. The bridge itself, was more stable than the other 2 canopy bridges on the tour and the views amazing. It had rained in the night and first thing this morning it was quite cloudy, but as we arrived at the bridge it cleared and the sun came out. 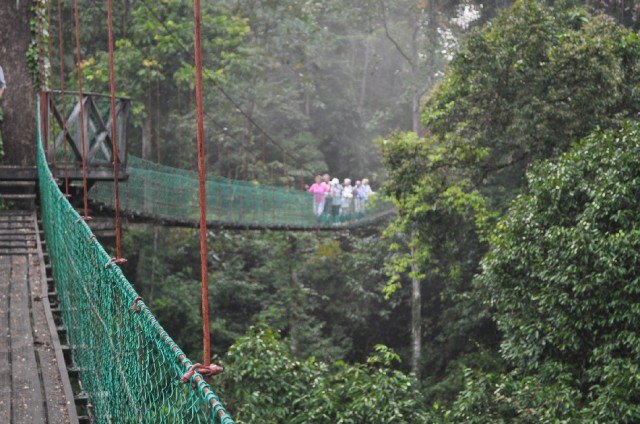 Canopy Bridge in the Rain Forest 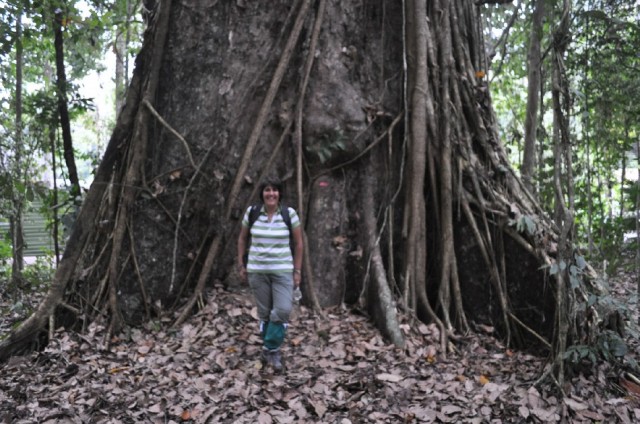 Huge Tree in the Rain Forest

You can’t describe the sounds and sights of the rain forest – just being here is incredible and an experience in itself.  Everything is big here – the trees, the leaves, the insects…

After returning to the hotel for a hearty breakfast, we set off for a big trek - ”The Coffin Trail”.

Despite everything that happened last night and my fear of spiders and any type of creepy crawlies. I am loving the experience of being in the rain forest. 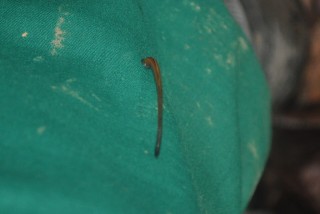 We spotted a few tiger leeches – I always thought leeches were black and round but the Borneo tiger leeches are stripey and quite cute.

The coffin trail takes us up to a view point and is named so because in the old days the tribes had their coffins up here. To see the coffins we had to climb up a ladder. The group are pretty adventurous and all of them managed the trek. We had 3 naturalists/guides with us as if anyone needed to opt out at any stage, they would have a guide to accompnay them back to the hotel.

The final part of the coffin trail is very steep and there is a rope to hang on to. As we arrived at the top the rain came. It never rains in the morning but today the heavens opened. It was strange as at the viewpoint, we were actually above the rain and looking down onto the rain forest and the storm. 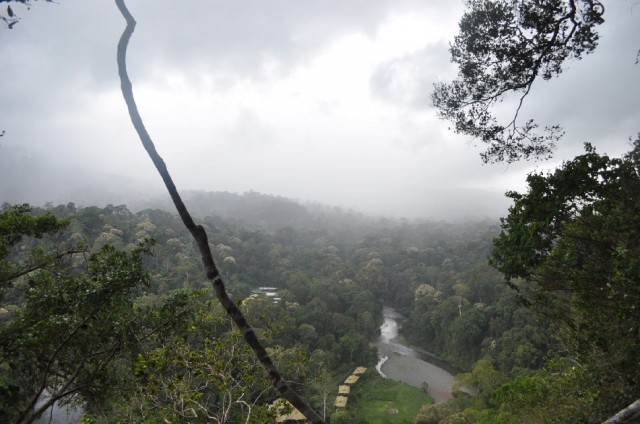 My guide got nervous and said it was dangerous to be up in the rain and that we should go down. He radioed for help and we made our way down the steep, slippery slopes of the rain forest. The rain was incredible and there was absolutely no point in trying to stay dry. By the time we reached our hotel we were all soaking and covered in mud – great fun!!!!

When I got in the shower, I noticed that there was something sticky in my hair and then realised it was blood. I had been leeched!! The leeach would live for a month on my blood and I got a certificate from the hotel, thanking me for donating blood to the Borneo Tiger Leeches.

Left the rain Forest behind today and headed for the Kinabatang River Lodge, where we will spend 2 nights. We have been without television for the last 2 nights and actually it is really nice to get away from things. I have been on the internet though and keep reading about this volcanic ash that has stopped all the flights in Europe. I am sure it will be fine in 3 days when we are due to fly home.

Our lodge can only be reached by boat and is fairly basic but ok.

Did 3 river safaris here – that means we went out on small boat, spotting the wildlife. Saw some nice animals.

On our first safari we saw the famous Borneo probiscis monkey. The dominant male probiscis monkey has a big red nose, big red belly and a big red penis, that my guide refers to as Borneo’s red hot chilli pepper!! 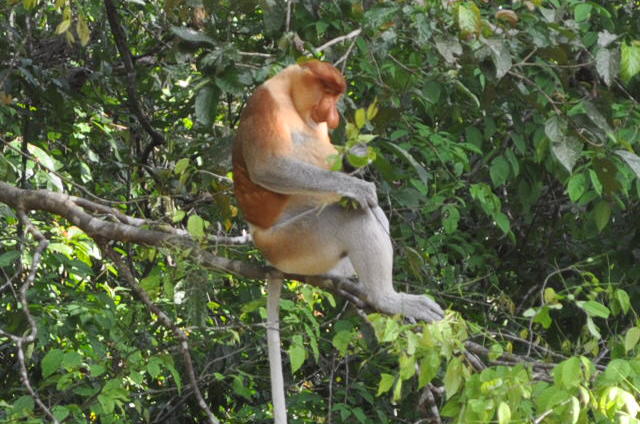 We were also very lucky to see an orangutan in the wild – mother and baby up a tree.

On our last safari, my guide informed me that he had heard about some Borneo pygmy elephants a long way down the river and did we want to go and have a look for them. Of course we did.

We really struck lucky and came across a whole herd of Borneo pygmy elephants, crossing a tributary of the river. Amazing. These smallish elephants are really only found in Borneo and we watched the herd crossing the river, one by one, for about an hour. The males, the females, young and old, mothers with babies. Some had difficulty getting out of the river as it was very muddy and slippery. Many of the babies did not want to go in the river at all, so had to be pushed in and helped out by their mothers.  Watching these lovely, intelligent creatures in their natural habitat was just incredible.

The tour is nearly over now and today we visited the Sepilok Orangutan Rehabilitation Centre. Many orphaned orangutans are brought here and hopefully taught how to survive, so that later they can be released back into the wilderness. It is a long road though. Locals have been known to keep the baby orangutans as pets in cages, which is illegal.

Oranguatan means “man of the forest” and the orangutan is supposedly 96% human.

Firstly we saw a film about the centre and then we walked to a platform where we could see the orangutans feeding.

Our final port of call is Sandokan. Tomorrow we fly back to Kuala Lumpur for our flight to London Heathrow, if that volcanic ash has cleared.

Borneo was occupied by the Japanese during the Second World War and some terrible atrocities occurred. We visited a former prisoner of war camp, which is now a memorial and museum. Sandakan was also the start of the Sandakan death march where 6,000 soldiers, mainly Australian, but a few British were brutally marched to their death.

We did a city tour and then checked into the hotel. I haven’t seen a television for 5 days and even though I had heard abouit the volcanic ash, I was unprepared for the news about the volcanic ash. My company called me to say that it was doubtful that we would be flying home tomorrow and that they had provisionally booked the hotel rooms for us for an extra couple of nights.

At dinner, I saw my clients, who had obviously seen the news also and some of them were panicking about the situation. I tried to calm them down and advised them to relax, sit tight and wait and see. That is all we could do. I wanted to get home – today was my 28th day away without a day off and I was tired.

Anyway, we were having dinner and 8 clients, who were all at one table, were getting quite agitated with me about the volcanic ash situation. I think they wanted me to tell them that we were flying home tomorrow and of course, even though it is good to tell the clients what they want to hear it is not always possible.

I decided to lighten up the mood and sent a guitarist/singer over to their table and told him to say that the next song was from me. He played “Leaving on a Jet Plane” Luckily, the clients saw the funny side.

I also set some tasks for the clients, to kill time in case we did have to stay here in Sandakan for an extra couple of days. Find the cheapest fried rice in town, the cheapest noodle or beer. Who can get their laundry done the fastest, though it would have to stay the same colour. Humour helps sometimes.

Well, I went to bed last night thinking we would be here for at least a couple more days, but I got a call from my company and from our local agent to say that our flight is on and heathrow is open again. How quickly things change. I phoned all the clients or caught up with them at breakfast to let them know the good news.

Much as I love Borneo, I am over the moon to be going home. 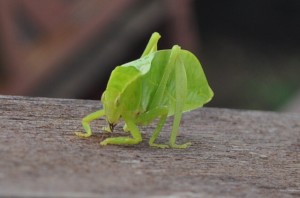 Woke up this morning and found this on my balcony. I thought it was a leaf until it started to move. I asked a naturalist what kind of insect it is and he told me it has a very complicated name – it is a leaf insect!

The Borneo Rainforest is full of tiger leeches and so for trekking we have to wear long trousers with leech socks over them to protect us from these blood suckers. Here is a tiger leech on my leech sock. 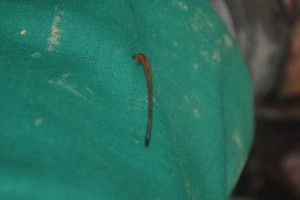