Goats and Festivals in Udaipur

Arrived in Udaipur only to find that all the roads to our hotel were blocked my the police due to a festival. We drove around the city trying to find a way to the hotel. The Hindu festival was in full swing and there was also a huge goat market for the Muslims who were selling goats to be sacrificed. I never saw so many goats. It is about £200 for a goat. Tracy Jeffries wanted to take them all back to Cannon Hall where she works to save them from sacrifice. So it was the police, the festival and goats that were blocking our way to the hotel. Very entertaining. 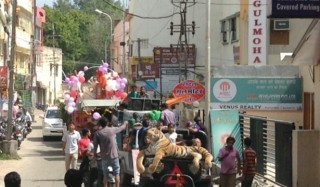 This entry was posted in India2013. Bookmark the permalink.