Now the clients must really think I am a slave driver after all the early starts over the last week, I have made them get up at 4.15 am to go for a boat trip on the Holy River Ganges at dawn. I joked with them that they are not on holiday but on tour. There is no place on earth like the Ganges at dawn. I am not a religious person but the whole experience sends goose bumps down my body. 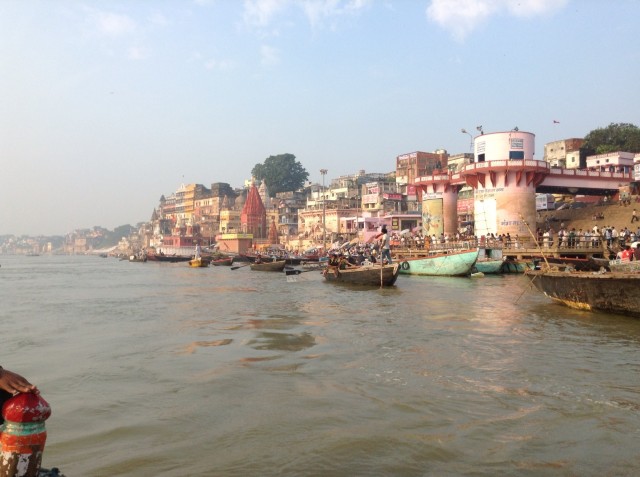 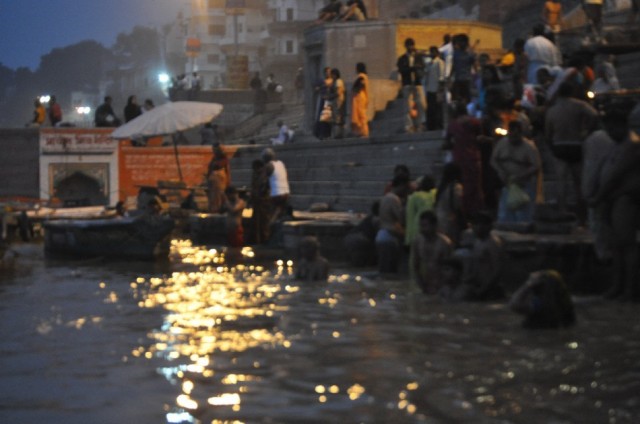 In India, we have 4 Mothers – our own mother, Mother India, Mother Cow and Mother Ganges. Yes, the cow in India is sacred and knows it, so wanders serenley through crazy traffic and busy streets with a knowing look on her face. Knowing she won’t be harmed and always has right of way. Mother Ganges is India’s holiest place. 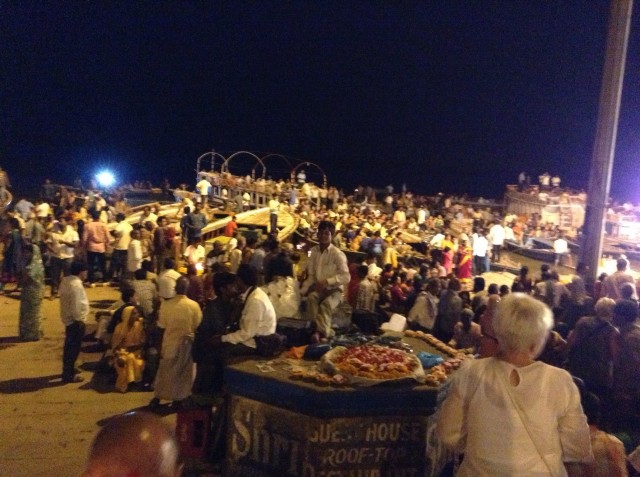 Varanasi is India’s holiest city and the River Ganges the heart of the Hindu religion. The Hindus believe in reincarnation. We start off as a mosquito and work our way up to return as a human being. If you look at the population of India – 1.1 billion – and then at how many of those 1.1 billion live in poverty – around 250 million – then it is astonishing that the crime rate isn’t higher. In fact the crime rate is fairly low in comparison to the population and poverty (apart from corruption and bribery, but that doesn’t count). The reason is that most Indians have faith in the Hindu religion, which boasts 330 million Gods and Goddesses and promises a better life the next time around if we behave ourselves this time around and enjoy a good kama. However, many Indian Hindus consider life on Earth as suffering and have no wish to be reincarnated and return to this suffering. They want to achieve a state called Moksha or Nirvana, which means there soul has been set free and they are free of earthly suffering. To achieve this they have to die in Varanasi, be cremated on the banks of the Ganges and have their ashes thrown into this holiest of rivers. Varanasi is full of hospices, because when a hindu who wishes to achieve moksha gets seriously or terminally ill, they will come to varanasi and stay at a hospice, to wait to die. Many bathers, mourners and pilgrims have their heads shaved and recieve a blessing from the Brahmin Priests who can be as young as five. 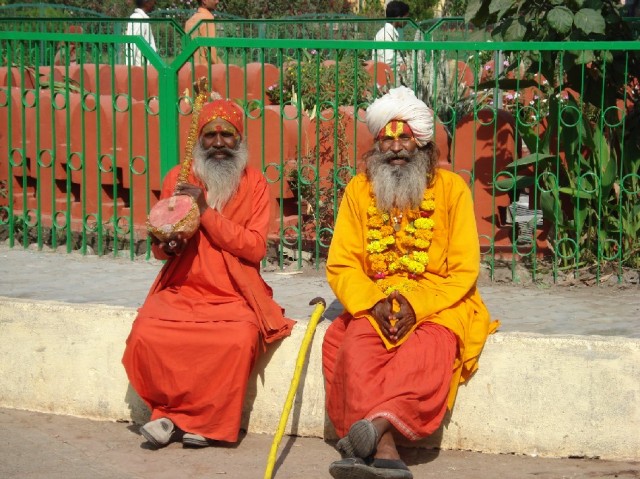 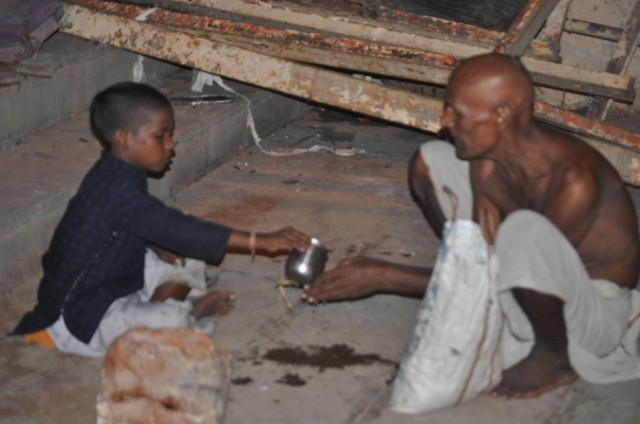 On top of this many Hindus make the pilgramage here to the ganges to bathe and wash their sins away. Many Sadhus (holy men live here).

It is good we are doing this part of the programme at the end of the tour as it would be too much to handle for our clients at the beginning, but now they have seen so much that they will be ok (I hope).

We had quite a walk through the streets of Varanasi before reaching the river and the Ghats. A Ghat is a set of steps leading down to the Ganges or any other river. We get our boat at the busiest Ghat. Pictures and words can not explain what is happening here, with all the sounds and smells, nor can I describe the emotions I feel everytime I visit this place. People are praying, chanting, performing rituals, bathing, washing, doing laundry, brushing their teeth, shaving, doing yoga, meditating, singing, fishing – all on the ghats or in the river. 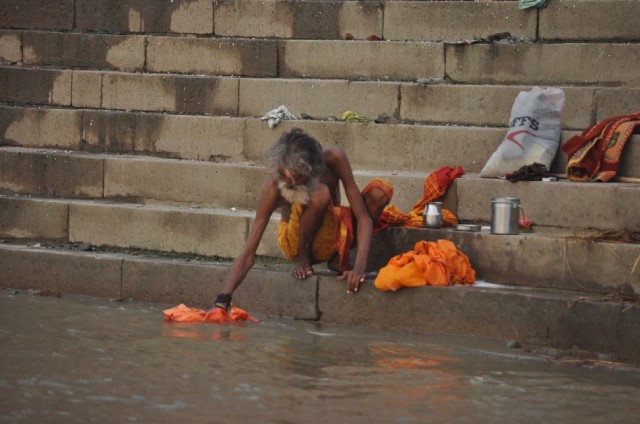 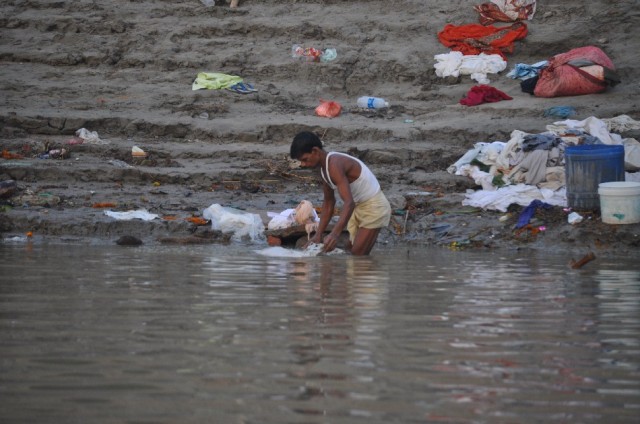 The boat trip is incredible and I bought marigold flowers with a candle in the middle for my clients which are to be floated down the Ganges along with a wish. I also floated a candle and made a wish.

We saw the 2 cremation spots on the river and some cremations. I aslo spotted a dead body in the river but decided not to point it out to my clients, as I didn’t want to spoil their day. If a family can not afford a cremation then occasionally they just throw the dead body intop the river. This guy looked quite young.

Only one side of the Ganges is holy – nothing is happening on the other side where the sun is rising. 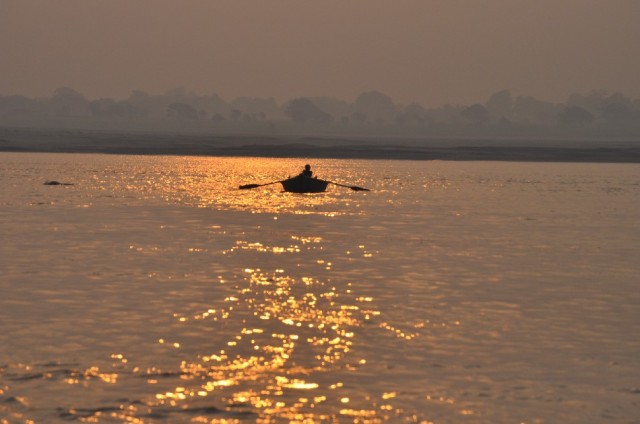 Sunrise over the Ganges