Rome is one of my favourite cities. It has been capital of Italy since 1871. The population has grown from around 300,000 to 4 million in that time. Like any big city, you can’t do it all in a day – Rome wasn’t built in a day.

Ancient Rome and the Colosseum
A real highlight. Climb to the top – there is an elevator if you wish to avoid the steps. Tip – to avoid long queues, buy your tickets for the Colosseum at the Palatine Hill by the archway of Constantine.

Roman Forum
What’s left of the of the ancient Roman market and town. Same ticket as the Colosseum. It would be easy to spend a whole day here.

Vatican and St Peter’s
Smallest country in the world. The queues for the Vatican can be very long and really I would recommend splashing out and booking onto a Vatican tour to avoid waiting hours. The Vatican Museum is amazing, but the highlight is certainly the Sistine Chapel and Michaelangelo’s paintings on the ceiling.

Trevi Fountains
Nice in the evening and takes up the back of a palace. Throw a coin in and make a wish. This comes from the ancient tradition of worshipping the Goddess of Water. The name Trevi comes from the Italian Tre Via, meaning three roads that used to lead to these fountains.

Spanish Steps
A bit of a disappointment, but a good atmosphere.

Piazza Navona Great atmosphere with artists and street vendors. Bernini’s fountain of the 4 rivers (Ganges, Danube, Nile, Plate)  is situated in the centre of this square. Great atmosphere here and best icecream at Il Tofufu. 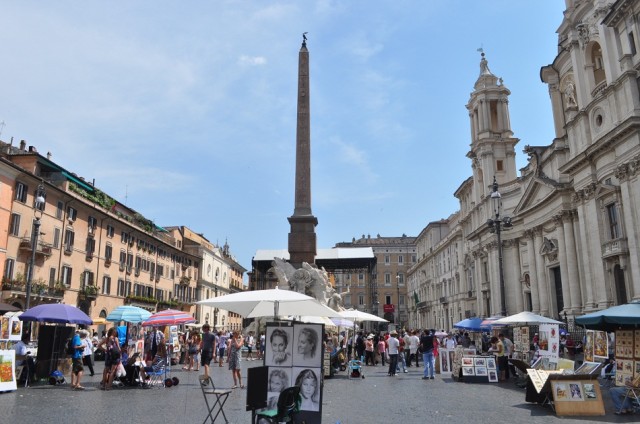 Castel Sant Angelo
The Emperor Hadrian built this as his own mausoleum. It was then used as a castle and now has a museum, but what is really interesting is to pay the entrance and walk all the way up the spiral path to the roof and enjoy the views.

Gianicolo Hill
Easy walk up this hill to Garibaldi Square, where beautiful views of Rome can be enjoyed.

Piazza Venezia
When Rome was made capital of a united Italy, many new monuments and roads were built. Piazza Venezia was built and the huge unification monument. From here you can easily walk to the Roman Forum, Piazza, Navona, Pantheon and more.