Today we visited Verona, which is just an hour’s drive from Venice, but there was an accident on the motorway so it took 3 hours to get there. This has scuppered my plan for the day and I have had to rearrange things. The group will have half an hour less in Verona, half an hour less break at the hotel and I have a private boat to take us to St marks, which is now ordered half an hour later. Time made up.

Verona is between Venice and the a Alps and was settled by the Romans, as their first port of call after an arduous journey through the Alps. The largest Roman Arena outside Rome is here and the Arena is now used as the venue for opera on summer nights. The town is also home to Romeo and Juliet and was an independent city state in the middle ages before it became part of the Venetian Republic. 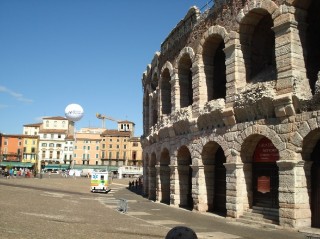 After a rushed day we got to the boat station for our boat to St Marks and it turned up half an hour late. Never mind.

We have dinner in a restaurant just off St Marks Square (I won’t mention the name of it in case I get sued) but unfortunately like many restaurants near St Marks, the food is poor and the service even worse. The clients had to wait 45 minutes before they got a soggy salad.

Complaints all around and I really understand.

After dinner we had some free time at St Marks and the atmosphere is truly magical after dark and when most tourists have gone back to their hotels.

This entry was posted in Italy Blog. Bookmark the permalink.