Vienna was once the capital of the huge Hapsburg Empire that stretched all the way up to Poland, Czech republic, Slovakia, Hungary, Romania, Italy and the Adriatic Sea. It even included parts of Mexico at one time. Since the fall of the Hapsburg Empire in 1918, Vienna has been the capital of Austria, a small republic in Central Europe. However Vienna maintains its grandeur and Imperial feel and is home to much fine art, culture and architecture. It has elegance about it, not found in other European capitals. Vienna is often underrated and overlooked but it is my favourite European city and definitely grows on you the more you visit. There is an abundance of museums, concerts and fine coffee houses.

Vienna once had a city wall, but as in many other cities the wall was pulled down to make way for more roads and buildings. In place of the city wall there is now a large boulevard circling the old city, known as the Ringstrasse. Two and a half miles in circumference, this road is lined with fine buildings, constructed in 1867, the year the wall was pulled down. These buildings include the fine arts museum, the Parliament, the City Hall, the palace theatre, the university and were all to represent the grandeur of the Hapsburg Empire.
Some trams go around the ringstrasse – trams 1 and 2. Take the tram around the Ringstrasse at night and see all these fine buildings illuminated. See our section on Public Transport. 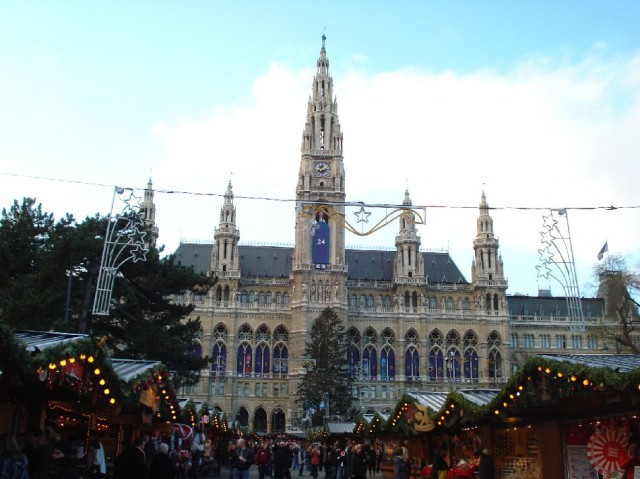 Also on the Ringstrasse, this square is named after Austria’s favourite Empress, Maria Theresia, who ruled from 1740 and had 16 children (one daughter was none other than Marie Antoinette). The statue on the square shows the Empress seated on a throne. The twin buildings are the Natural History Museum and the Fine Arts Museum.

The Fine Arts Museum (known locally as the Kunsthistorisches Museum – Art History Museum) has got to be one of the best art museums in the world. My tip in this museum would be to pay the extra for the audio visual and then all you have to do is enter the number of the painting you are viewing and you will hear the explanation. You can even just sit back on the leather couches there and listen to the explanations – a great way to learn about art. Even better you can flag your favourite articles and when you return the audio visual the staff will connect it to a computer and you can again pick out your favourites and have a book printed with the pictures, explanations, date of visit and your name. A nice souvenir.

I would definitely recommend this museum. It is worth it just to see inside the beautiful domed building.

Built as the summer palace of the Hapsburgs, this is definitely a highlight. The U4 underground railway will bring you here and the station is conveniently named “Schoenbrunn”.  It is worth a visit just to see the outside of the palace and the extensive gardens. Europe’s oldest zoo is also here. You can also walk up to the Gloriette and visit the maze.  Inside visits include the use of an audiovisual and there are 2  different tours – 20 rooms or 40 rooms of the 1441 rooms here. 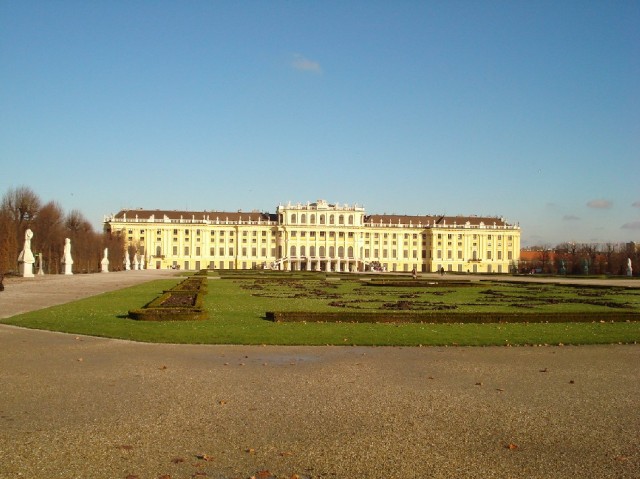 Situated on the Ringstrasse this extensive winter palace of the Hapsburgs is like a town within a town. Every Emperor or Empress must have added his or her own wing. The gardens of the Hofburg are huge and I would definitely recommend just walking through the grounds of this immense palace to get an impression of the imperial might and glory of the Hapsburgs. Several museums are housed within this complex.

Emperor’s Apartments – How the Emperor lived but if you have visited Schoenbrunn then this is pretty similar.
Treasury and Crown Jewels – see the crown jewels of the Hapsburgs.
Sissy Museum – All about the Empress Sissy, wife of Austria’s longest serving Emperor Franz Josef, who ruled for 68 years.
Musical Instrument and Weapon Museum
Lipizzaner Museum – all about the Spanish Riding School.

Views over Vienna from the Upper Belvedere are worth the walk through the gardens.

There are trams, buses and an underground railway system to get you around Vienna. All are efficiently organised and very clean. One ticket covers you for all and costs 1.80 Euros. You can get a strip of 10 tickets at a reduced price. A 24-hour pass is good value as is the 72-hour pass. Tickets can be bought from machines at the underground (U-Bahn) and tram stops or much easier from tabaconists.

The Vienna card gives free public transport and reductions on all museums so is another good option.

Europe’s very first coffee houses were founded here in 1683 after the Turks held Vienna to siege for a year and fled leaving sacks of coffee beans.

The coffee house is an institution in this city and offers various coffees with freshly made cakes and pastries. My advice is to give yourself plenty of time to relax and have coffee and cake in one of these fine establishments.

Demel on Kohlmarkt near the Hofburg Palace is my favourite and they even used to bake cakes and pastries for the Emperor himself in days gone by.

The Sacher behind the Opera House offers the world famous Sachertorte, a secret recipe chocolate cake.